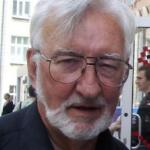 At the November 4th General Meeting, retired Canadian diplomat, Nestor Gayowsky spoke to a packed house on the topic of establishing democracy in Ukraine and what had transpired in that country since 2014.

From 1981 to 1983, Nestor Gayowsky was posted to Moscow as Trade Commissioner. That assignment led to his appointment in 1989 as Executive Director of the Canada-Soviet Union Trade Task Force.  In December of 1990 he became Canada’s first domestic diplomatic representative to the Ukranian and Belarusian Soviet Socialist Republics and Consul General.  In December 1991, Nestor delivered Canada’s formal diplomatic recognition of Ukraine to the newly elected President.  Subsequently he had the honour of establishing Canada’s Embassy in Kiev in January 1992 as Charge d’Affaires.

So who better qualified to speak to our group about the Ukrainian people’s desire to become democratized, the corrupt factions that stood in their way and the bloody David and Goliath conflict (The Revolution of Dignity) that ensued.

For more information on this portion of history:  https://en.wikipedia.org/wiki/2014_Ukrainian_revolution

To watch an award-winning film on the revolution, check out Netflix film:  Winter on Fire

APRIL MEETING VIA ZOOM: Speaker Roger Griffiths: Spring from the Countryside to the Alpine